The Rigmarole of Oshen is a history book, found in Red Tulip Town's library. Nino discovered it resting on top of the first row of books, alone and already opened, left by whoever decided to take it out last. He glances through three pages of the book, looking at the pictures, then puts it back where he found it out of boredom, as he cannot understand the text. The book, or at least the section of the book that Nino looked at, seems to focus on the relationship between humans and monsters over the ages.

The contents can only be understood if you reflect (mirror) the pages. 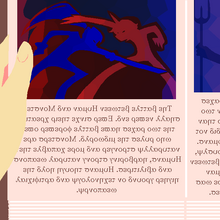 The first page details the unending struggle between humans and monsters.

“The battle between Human and Monster shall never end. Ever since their creation the two races have battled forever over who rules the midworld. Monsters are naturally stronger and more capable than humans, harboring strong natural weapons and abilities. Humans though hold the higher ground on technology and artificial weaponry.” - Page 404

This alone provides a wealth of information about the history of the world. The big war that ended with the death of the monster prince, and the birth of the barrier that separates the monster world from the human world? No where near the first war between the two races, and if it hadn't been for the Divide, it probably wouldn't have been the last. This is also the second source that's told us that monsters naturally have a stronger ability, when compared to humans (this is also mentioned on page 407).

The second page touches up on the subject of the short state of peace between monsters and humans before the war, as well as introducing a concept not yet seen in Oceanfalls, or mentioned anywhere else in the story - a queen.

“The queen elected to let the two races share the midworld, and split it in two halves. But monsters were higher than humans on the hierarchy, so they did not accept being put as an equal to humans. War broke between the two continuously, until the last decade of compromise between the past Monster Prince and Human Princess. Though it was brief, there was quiet peace between the two races.”

This excerpt introduces the queen for the first time in all of the comic, someone who apparently has the power to largely effect both the human and monster races. It is unknown what race the Queen is, but signs point to her being the ruler of the Winged, the race that seems to be above both monsters and humans, literally. It may also be worthy of note that the book mentions a Human Princess, rather than just a prince. It is currently unknown how the two are related, if by anything another than their stations as royalty. 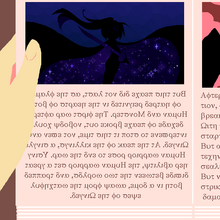 The final excerpt once again mentions the warrior that we hear about in Aria's story, who killed the previous monster prince, and created the Divide (Page 368). Not only that, but it casts an interesting light on the position of the Winged, in the grand scheme of things.

“But this peace did not last, as the flames of hatred reignited in the hearts of both Human and Monster. The first war after decade of peace broke out, nobody could intervene to stop it this time, not even any Winged. At the peak of the killings, a single Human warrior rose to end the war. Using her ability, the Human warrior set a great divide between the two worlds, and trapped both in a dome, away from the watchful eyes of the Winged.”

The first war after years of peace, but this wasn't just any war. Allegedly not even the Winged, who are more powerful than the humans and monsters, could do anything about it. While the warrior's gender was originally ambiguous, this text reveals that she was a girl. Her barrier separated the humans from the monsters, and whether she meant it to or not, also created a dome that stopped the Winged from keeping an eye on the other two races.

Retrieved from "https://oceanfalls.fandom.com/wiki/Rigmarole_of_Oshen?oldid=390"
Community content is available under CC-BY-SA unless otherwise noted.