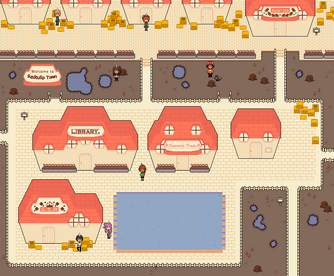 Red Tulip Town is a small town in the Monster World, known for and named after its red tulips. Aria lives in Red Tulip with Ludwig.

Kotori is the local guard of Red Tulip, and the locals seem fond of her.

The town houses a wishing well in its midst, where locals can allegedly receive a winged's blessings and make wishes to be granted by them.

Aria's house is the first building Nino enters. Initially, after he experiences vivid flashbacks and passes out in the graveyard, Aria tells him that she brought him to her home with Ludwig's help.

The house is small and humble. It has two beds with a nightstand between them, and atop the nightstand is a picture frame housing a photograph of a young Aria and her late mother. The house has a small kitchen, which Aria uses to prepare muffins and tea for Nino and Five. There is also a small dining table, and what appears to be a reading desk.

The Library is a building in Red Tulip which houses many variants of books, such as research books, botanical books, historical books, and possibly cosmology books. The first row of shelves is where Nino reads about the human warrior in a book titled "Rigmarole of Oshen."

The row of books under the library's owner possibly holds books on cosmology, but Nino doesn't get the chance to check them because of the irritable owner.

Heavenly Treats is a small café, run by a winged. It is self described as "a place that sells pastry blessed by a winged's hands". The food served in Heavenly Treats seems to induce food-poisoning in customers, though a customer tells Nino that the moment anyone enters the cafe, they're automatically under agreement not to sue for any illness.

G.E.M is a gem-dealing shop. Its name stands for Glacier's Excavations Merchantry.

Red's Inn is a small inn with two floors, located at the top left of Red Tulip town. It is named after the same red tulip flowers that the town name was based on. The inn is ran by a group of suspicious maids, who physically attack Nino and rob him of his belongings, before kicking him out. Nino suspects it's a shop set up just to rob people in that fashion, and that it is not actually an inn for resting.

Red's inn is seen again when Solis checks up on Kotori, after Intermission 1. The maids treat Kotori's injury, and appear ecstatic to receive payment for it from Solis.

Retrieved from "https://oceanfalls.fandom.com/wiki/Red_Tulip_Town?oldid=588"
Community content is available under CC-BY-SA unless otherwise noted.